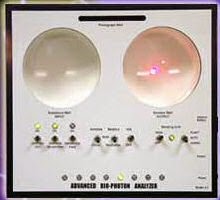 My colleague, Dale Fawcett, called last night excited about the results he has seen from treating him in Seattle by broadcasting frequencies from one of my Advanced Bio-Photon Analyzers (ABPA) located in Boston. Dale is one of the leading distributors of the FSCAN2 in the United States and at the Rife Conference in Seattle last weekend he signed up with the Advanced Bio-Photon Analyzer to enable anyone to now achieve excellent ‘remote sessions’ either by itself or with Rife, Clark and other modalities. He gives great support, and a money back guarantee. Give him a call at (360) 598-6585 or email him at innerhealth@comcast.net.

The FSCAN2 was anticipated by the Star Trek Tricorder. Trekkies will remember that a patient was scanned and treated by a handheld device. However, Star Trek never anticipated a universal healing device that can scan and treat anyone on the planet at any time like the ABPA. This device is so unexplainable by conventional science that my wife, a Unitarian Minister, calls it my prayer wheel. She tells people to have me pray for them and they will feel better. Praying is a little shocking to some Unitarians, but Isaac Newton was a closet Unitarian and they are all interested in radical technology breakthroughs.

Larry Dossey, a fellow Vietnam veteran, is a highly decorated physician who is Executive Editor of Alternative Therapies in Health and Medicine. He and others have published a number of papers in medical journals showing that prayer by random people for random patients improves clinical outcomes by about 10%. The ABPA does much better than that. It improves clinical outcomes in 100% of people if used properly and is my preferred mode of using electronic frequencies to kill pathogens.

As Lao Tsu once said, the best action is no action at all and the ABPA follows that way of thinking. There is no electrical contact, no detectable radiation, no limitation to treatment time, and no wires to tie you down. It is great while traveling and extremely useful for treating for pollen frequencies when running outside during pollen season. I’ve posted several notes on this web site about how to do this.

The ABPA is a low power device, in the sense that it takes about 5-10 times as long to knock out a virus, bacteria, or parasite as it does when directly connected to electrodes from an FSCAN or other frequency generator. It can take days to knock out a nasty parasite. You can just set it and forget it. It degrades very slightly with distance. About 75% of the effect can be felt in Seattle from Boston.

Using remote transmission from a ABPA in conjunction with applying frequencies directly with a Rife or contact device works better than either approach alone. It is essential for difficult cases. The value of the Bio-Photon Integrator is that it impacts every cell in the body, independent of depth, so it cleans out organisms that may not be affected otherwise. Recurrence can often be prevented.

If you want to try out an Advanced Bio-Photon Analyzer, give Dale Fawcett a call at (360) 598-6585. I’ve agreed to help him support anyone in their initial investigations of this intriguing device. It takes prayer to a whole new level. Recently the Dalai Lama gave a talk to a full house at the Fleet Center in Boston. He started off by saying he was highly skeptical of alternative medicine but if anyone in the audience had something useful, he needed help with pain in his knees. I cranked up one of my ABPA “prayer wheels” full power on his joints for a few nights until I could no longer detect any micro-organisms.