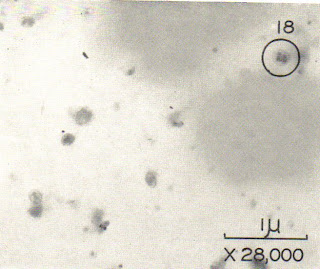 “Cancer virus” in carcinoma of the uterus – Gregory, 1952

Remarkable findings are routine in electronic medicine. However, some are more useful than others. After recent discussions in the Rife newsgroups, I bought a copy of:

Dr. Gregory was a surgeon who studied the pathology of tumors under one of the first electron microscopes. He found the same organism in all cancer patients and called it a “cancer virus” because of its small size. It would not be called a virus today because it replicates by cell division.

It is easy to knock out malignant cells with electromagnetic frequencies as shown by Gorgon. However, it is not so easy to prevent development of new malignant cell populations. Previously, I have shown new populations related to the SV40 virus, parasites, baccilus licheniformis, and nanobacteria. Yet eliminating all of these organisms does not necessarily stop recurrence.

The Gregory “cancer virus” may be a key factor. Dr. Gregory comments:

Is this virus a product of cancer or the cause of the disease? To answer this question, cultures of malignant melanoma virus were injected into mice and baby chickens. In 25 per cent of the injected animals there developed cancers which included cancer of the ovary, adrenal, breast and stomach, spindle cell sarcoma, myosarcoma, and leukemia. A control group, ten times larger, developed no malignancies. Further, the virus isolated from the developed malignancies was the same as that injected. The virus was also re-cultured from the tumor and again it was the same as that injected. This carries out all the criteria of Koch’s Postulate. I have now carried out this experiment and have fulfilled Koch’s Postulate over fifty times.

It is interesting to note that in the group of tumors developed, less than 10 per cent were the same type of tumor as that from which the original virus came. This proves that the cancer cells were not transplanted, producing the tumors…

One research group at a medical school has carried out this experiment through nine consecutive animals, producing nine different malignancies. The virus was cultured from each tumor, and the virus culture was then injected into the next animal, producing another cancer. When the last experiment was finished the final re-cultured virus was found to be the same as that used to start the experiment.

This proves that human cancer virus, which has been found in 100 per cent of human cancers, actually causes the cancers and is not present as a secondary invader.

An additional experiment was performed to rule out the possibility that the tumors were caused by the transmission of a chemical agent. This virus was heated to 56 degrees C. for one hour and then injected into twice as many animals as before, but no malignancy developed. This proves that it is living virus which produced the malignancies.

While there are many organisms, genetic programs, cellular problems, and immune issues related to malignancy, the “cancer virus” appears to be the only organism present in 100% of the cases. Removing it should certainly lower risk. With a little luck, it might be equivalent to the pump handle that John Snow removed from the Broad Street water supply during the 1854 London cholera epidemic. It stopped the epidemic immediately.

More recent information (2019) indicates that this is the organism found in all tumor cells that was DNA sequenced and found to be bacillus licheniformis. Frequencies are available to subscribers.