The Harmony Chip is a unique device that I have been using with Advanced BioPhoton Analyzers (ABPA) for some time now. While the chips are designed to be worn on the body, putting the chip on the ABPA antennae will cause the effects from the chip to be broadcast remotely to the entire body. This significantly improves all organ system functions and has led to a reduction of 80% of nutritional supplement requirements in my tests when running 24 hours a day. The savings on supplements easily pay for the chip (and the ABPA).

It may have a similar effect on reduction in the need for medication. Since I have had no need for any medication other than nutritional supplements since 1993, I haven’t been able to test this and leave it to other researchers. There is an individual report on virtually complete elimination of symptoms and medication in a fibromyalgia patient on the Harmony United site. Medications were reduced from $52/day to almost zero. As always, your mileage may vary. What works well for some may not work well for others.

For those using the ABPA for broadcasting frequencies to eliminate pathogens, effectiveness of the device appears to improve by a factor of 25 with a Harmony Chip on the ABPA antennae. Thus the chip is highly recommended for the ABPA. Put it in the input well or on the green antennae accessory and leave it there.

Recently a New Zealand Rugby League competition had a team using Harmony Phone Chips in the shoes and taped on their bodies. These are small versions of the original harmony chip. They credit the improvement in performance and speed of recovery from injuries for winning third place. Rugby is a rather brutal sport so if they work there, they will work anywhere.

Check out the chips …

The weekend went well for the trial of the Harmony Phone Chips. It was amazing to hear from the 9 referees at the end of the weekend that they all reported that the Harmony Phone Chips had helped them from normally having sore feet after such a busy 2 days refereeing games. One had had foot surgery 2 months prior to the weekend and was very impressed as they had thought that refereeing 1 or 2 games would have been their lot but did 8 games over the 2 days. Two had old ankle injuries and weren’t sure how they would go and they were very pleased to have tried the Harmony Phone Chips as they had no pain which they often previously did when running.
The other 5 referees said that they could feel the difference from having the Harmony Phone Chips in their boots, and the one in the photo below also had a Standard Harmony Chip on the centre of his chest and said that he had not had much sleep the night before the games and in his first game he said that his body felt like he had plenty of energy and could run around all day, which he did. His name is AJ Purnel (see below). 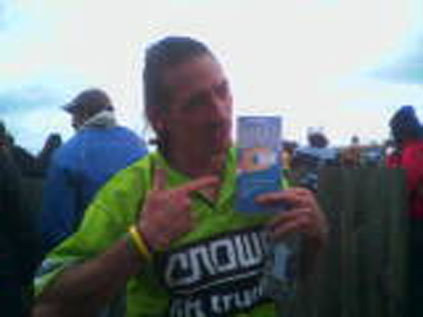 A photo of AJ Purnel holding a Harmony Chip flyer and telling another about how it had helped him for his feet and energy over the weekend of games.This is a photo of Graham Dawson who tried the Harmony Phone Chips in his boots after playing four games Graham had no sore feet and his team had won the right to be in the final. 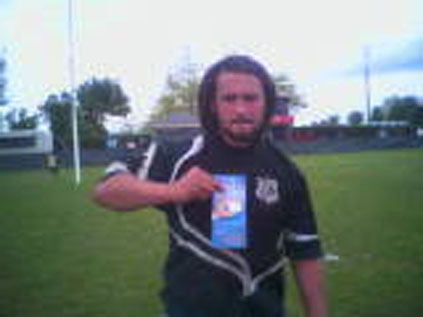 Graham was pleased to have a photo of him holding a Harmony flyer after the final game as he said that his feet felt great and were not sore anymore and that during the game he felt better than before having played so many games.

This photo below is the Rugby League Team that used the Standard Harmony Chip for injuries, recovery within 4 minutes from coming off the field and then back on again (The team is allowed to have 4 players as subs on the bench to cover injury and breaks for those needing a short rest and normally it takes 10 minutes to get their breath back but not when placing a Harmony Chip just below the top centre of the chest, only 4 minutes they were amazed).

The team coach and manager said that if it had not been for myself and the Harmony Chips the team would of only had 7 players on the field after their 2nd game as the competition was hard on the body. This team came 3rd which is the best placing they have ever had at this tournament…