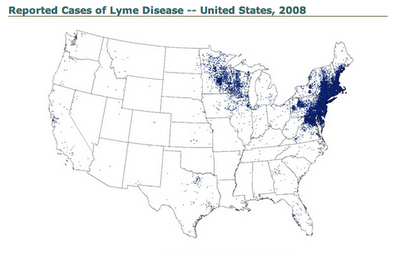 CDC publishes a map of Lyme disease risk showing the gradual spread of Lyme disease across the United States. CDC estimates reported cases are 10% of actual cases, so Lyme disease is a massive epidemic that has spread to other countries as well. Over 50% of the people I now test are positive for Lyme organisms, although many of them may temporarily be asymptomatic. Merck researchers observe Lyme mycoplasma in over 95% of the population.

Lyme disease is unlike any other syndrome on the planet. Alternative practitioners note that it is more difficult to treat than cancer. The reason for this is that it is a complex of thousands of viruses, parasites, fungi, mycoplasma, and other organisms. There is enough published circumstantial evidence to conclude that it is designed to be undetectable in the early stages, untreatable, and eventually, permanently disabling. It is also gets worse if treatment is attempted, a phenomenon observed in the Herxheimer reactions noted by those who try to treat their Lyme disease. Frequencies need to be carefully designed to avoid these reactions as much as possible.

During 1991-2002, the reported incidence of Lyme disease nearly doubled. Most cases continued to occur in northeastern, mid-atlantic, and north-central states, and the largest population of cases continued to be reported among persons aged 5-9 years and 50-59 years, possibly as a result of greater exposure than other groups to infected ticks, less frequent use of personal protective measures, differential use of health-care services, and/or reporting bias. For additional information, visit CDC’s web site at http://www.cdc.gov/ncidod/dvbid/lyme/index.htm.

Analysis of hundreds of people and animals with Lyme disease have produced the latest Frequency Foundation Lyme Disease Version document which has now grown to a small book of over 100 pages. In the latest version, frequencies are published in ready to run F165 programs which can be modified to run on any device. The frequency set is certainly not finished as new Lyme organisms or updates to older frequencies are discovered on a daily basis.

Refinement of frequency sets are based on work with hundreds of people and animals on a daily basis for many years. Several new programs and major updates to previous programs are included in the latest version:

• Lyme heart viruses – a group of Lyme viruses tend to proliferate in the heart and cause pain and palpitations in some individuals.
• Lyme stealth organisms – certain organisms take years to detect and are very persistent. Some of them have crippling effects. These have been packaged into a separate program.
• Lyme insects – funded research on insect frequencies has led to the creation of a Lyme insect program. Most of these frequencies are tick frequencies.

• Lyme mycoplasma – the core of Lyme disease is a mycoplasma bioengineered from weapons grade brucella at Plum Island laboratories [1].
• Lyme viruses – many of these are crippling. Many of the most dangerous viruses in the world were brought to Plum Island for experimentation, the Rift Valley virus from Africa, for example.
• Lyme babesia – there are hundreds of strains of the babesia parasite.
• Lyme parasites – there are many other parasites, many of which are released after killing babesia
• Lyme cells – the Lyme mycoplasma get inside cells and cause genetic mutation. These aberrated cells often cause pain and some can progress to cancer.
• Lyme bacteria – many of the bacteria in Lyme emit neurotoxins. These are what physicians typically treat with antibiotics. Paradoxically, these are the easiest to eliminate with frequencies. Lyme is a much bigger problem than spirochetes which many have discovered after their physician pronounced them cured.
• Lyme rickettsia – variants of this organism cause Rocky Mountain Spotted Fever and other diseases.
• Lyme fungus – these are very difficult to get rid of without frequencies. Some produce toxins which get into cyclic biochemical pathways that prevent elimination without frequencies or special treatment.
• Proteus mirabilis – another pathogen always found in Lyme.
• Gnathastoma spinigerum – another pathogen always found in Lyme.

While sets of the Lyme frequencies can be manually run on any device, they are best run with programmable frequency generators like the F100 series from Atelier Robin due to the length of the programs. Frequency octaves can be created for any device as described in the documentation.