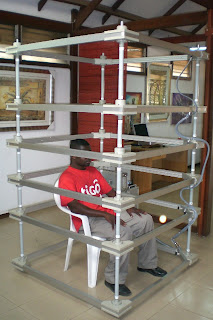 Those who understand frequency medicine know that malaria is completely unnecessary and can be eliminated in a few hours. Here is a machine that can do it in 60 minutes for a light infection. Of course this a big hammer to crack the walnut. Much smaller devices can do the job. The good news is that someone is actually doing some testing.

A physician from one of the leading multi-million dollar malaria projects in the world told me at an MIT conference that if they even tested an electromagnetic device on a malaria patient their funding would be totally eliminated.

Malaria is a condition of which 500 million people are affected every year, with as many as 2.7 million dying, mostly children. Malaria is caused by a parasite transmitted by mosquitoes in warm and damp areas, especially in Africa. The parasites are becoming increasingly resistant against the available drugs.

Prof Henry Lai at the University of Washington in Seattle studied the mechanism by which artemisinin, a natural compound used against the malaria parasite, works to kill the parasite. It has to do with the interaction of artemisinin with iron that is stacked within the parasite. Looking at the iron stacks, Prof. Lai wondered whether treatment with an oscillating magnetic field could maybe kill the parasite.

Lab tests were successful and Prof. Lai published his work in 2000, hoping that others would take up the idea and develop units that could be used to treat malaria with magnetic fields. Unfortunately, this did not happen.

I saw Prof. Lai’s study some three years ago and was amazed that 6 years after publication, no one had developed any application of it! So I set out to do just that. It took 12 months to develop three prototypes of the device. They are man-sized devices, the larges one almost 2 meters (7 feet) tall. While developing the units, we started to network with African Governments in endemic areas to see whether we could run a test wit the devices. Finally we had the blessing of the Ghana Health Ministry. My right hand Konrad and myself traveled to Ghana in February of 2008 to start the tests.

How to get three large units into an African country is a science in itself, but we finally sailed around all cliffs and were ready to go. Our first aim was to try the treatment with patients that had los levels of parasites, just to see whether there would be any adverse effects. We worked with 4 patients. There were no adverse effects, but also the before and after tests showed that malaria was cleared in a very short treatment time with our units!

We then went on to work with a hospital to treat a larger number of patients — the goal was to treat some 30 patients. After a few days we realized that we could not use those tests because the lab at the hospital bungled al lour blood test slides. At the end of our time in Ghana, we had only our first 4 (but very good) results and the useless hospital experience. We did not have the time to continue at that time but instructed a local professional on how to use the machines.

Now our first study is finished and 26 patients were treated. Out of the 26 patients, all except one became negative with the magnetic treatment! One felt worse the day after treatment started and decided to go for medication instead, so he dropped out of the study. The other 25 patients all became negative. And the ones who did not have high levels of parasites, were negative right after the first 60 minutes of treatment! This is so fast that we do not really have an explanation of how it could work so quickly. But the results are nothing short of sensational.

Now our goal is to do a second study and to get others on board to turn this into a household unit for treatment of malaria.