Modeling the Effects of Climate on Bubonic Plague 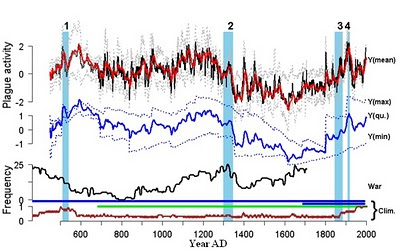 Modeling the effects of climate on plague. In the top plot, the solid black line represents plague activity in the central Asian rodent population (Y(mean)) over the past 1,500 years, as estimated from the authors’ model of the effects of climate (including via observably correlated vegetation indices) on this natural reservoir (sylvatic) plague activity. The broken gray lines show 95% quantiles and the red line represents the multi-frequency (2 to 60 years) Gaussian moving average. The dark-blue plot represents the long-term (2 to 400 years) multi-frequency mean, with the maximum (upper broken line, Y(max)), minimum (lower broken line, Y(min)) and sum of minimum and maximum (solid line, Y(qu.)). The periods leading up to the Justinian Plague (1), the Black Death (2), the 19th-century pandemic (3) and the Manchurian epidemics (4) are shaded in pale blue. The third plot shows the index of conflict between Chinese and nomad societies (solid black line, War). Below this are shown the coverage of the climatic data used in the modeling: glacial series (blue), tree-ring index (green), and the decadal coverage in the monsoon proxy (brown). Taken from Figure 3d of Kausrud et al.

Paleoclimate and bubonic plague: a forewarning of future risk?

Anthony J McMichael
National Centre for Epidemiology and Population Health, Building 62, Mills Road, The Australian National University, Canberra, ACT 0200, Australia
BMC Biology 2010, 8:108doi:10.1186/1741-7007-8-108
The electronic version of this article is the complete one and can be found online at:http://www.biomedcentral.com/1741-7007/8/108 © 2010 McMichael; licensee BioMed Central Ltd.This is an Open Access article distributed under the terms of the Creative Commons Attribution License (http://creativecommons.org/licenses/by/2.0), which permits unrestricted use, distribution, and reproduction in any medium, provided the original work is properly cited.

Pandemics of bubonic plague have occurred in Eurasia since the sixth century ad. Climatic variations in Central Asia affect the population size and activity of the plague bacterium’s reservoir rodent species, influencing the probability of human infection. Using innovative time-series analysis of surrogate climate records spanning 1,500 years, a study in BMC Biology concludes that climatic fluctuations may have influenced these pandemics. This has potential implications for health risks from future climate change.
See research article http://www.biomedcentral.com/1741-7007/8/112

Today’s diverse populations within the vast Eurasian continent, whether east, west, central or south, retain a horror of ‘the plague’ – as dreadful an agent of gruesome death as Ebola virus and yellow fever. Over the past two millennia, several pandemics of bubonic plague, caused by the flea-borne bacterium Yersinia pestis, have occurred within Eurasia, spreading quickly and often then lingering. Using a stepped approach to a set of long historical time-series data, including climatic, pandemic, epidemic and social-political variables, a study by Kausrud and colleagues published in BMC Biology concludes that naturally occurring climatic fluctuations, acting through their environmental, ecological and political impacts, may have influenced the human pandemic outbreaks.
Descriptions and theories about the occurrence of bubonic plague, particularly the Black Death (estimated to have killed one-third to one-half of Western Europe’s population), have engrossed many medical historians. In particular, the two great, recognized historical pandemics of bubonic plague have spawned various controversies.
The first was the Justinian Plague of 542 AD, which devastated Constantinople (by then the seat of the embattled Roman Empire). That great outbreak spread to engulf the greater Eastern Mediterranean region during the later sixth and seventh centuries. Second, in the 14th century, was the pandemic extending from China, through Central Asia, and eventually reaching Europe (the Black Death). Both pandemics occurred when great and complex political structures were becoming vulnerable. Did the Justinian Plague contribute to the terminal weakening of the eastern Roman Empire? Did the Black Death hasten the collapse of Europe’s feudal system, and the advent of liberalizing moves towards mercantilism, literacy and the Renaissance? (And was the rise and fall of the Mongol-controlled Yuan Dynasty in China, from the mid-12th to mid-13th centuries, influenced by flickering pre-pandemic plague epidemics in China during that Medieval Warm period?)

Traces of bubonic plague can be found in all people of northern European descent and these are easily eliminated with frequencies. During the swine flu epidemic, bubonic plague was found as one of the many organisms circulating with 1918 swine flu in parts of the world and there was a plague outbreak in a small town in China. As a result, frequencies for Yersinia pestis were updated. Subscribers can find them at subscribers.frequencyfoundation.com.
Today the bacterium Yersinia pestis is controlled by antibiotics. It is even more easily controlled by frequencies. Proper application of the right frequencies could prevent any future epidemics.