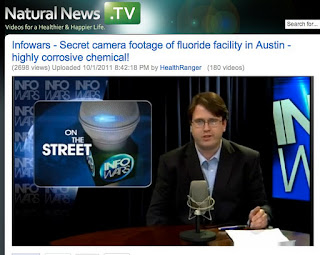 There is more and more political action against flouride in the water. Flouride is a carcinogen that damages brain function even in small doses. View an interesting new video on an actual visit to a water treatment plant in Austin, Texas.
When I was an NCI Principal Investigator of cancer research grants at the University of Colorado School of Medicine in the early 1980’s, I often found myself in meetings with the leading researchers in carcinogenesis from all over the world. They advised me not to drink tap water because of the various carcinogens that were always present. Some of them are put in the water intentionally, like flouride.
Fluoride Spurs Bone Cancer Risks in Young BoysThe 60th anniversary of fluoridation in the United States (jointly announced by the Centers for Disease Control and the American Dental Association) is certainly nothing to be excited about… A study from the Harvard School of Dental Health found that young boys exposed to fluoridated tap water from ages 5-10 suffered an increased risk of osteosarcoma–bone cancer–between the ages of 10 and 19. This study is the first to link the toxic effects of fluoride to a child’s development and the beginnings of bone cancer. (No such link, however, was found among young girls.) Moreover, osteosarcoma, though rare, is an especially dangerous form of childhood cancer, as:

There are plenty of other things to worry about with a toxic substance like flouride (see Dr. Mercola’s links). Frequencies can be transmitted to vibrate flouride atoms and cause them to be flushed from your body. If you have a means to test for frequencies you can determine your level of flouride contamination.