Frequency Foundation
Resonance is the Key
Close
HomeBlogBacteriaBiofioms: Only Frequencies Can Eliminate Them

Biofioms: Only Frequencies Can Eliminate Them 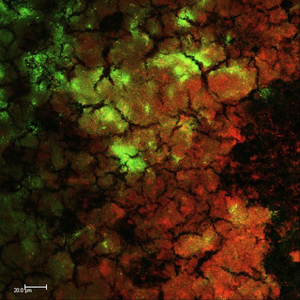 Bacterial communities just like these thrive on your gums and teeth (and everyone else’s too).
By Ronald Ordinola Zapata (Own work) [CC-BY-SA-3.0 (http://creativecommons.org/licenses/by-sa/3.0)], via Wikimedia Commons
Engineering Biofilms – ResearchPennState
Understanding how bacteria function in communities could lead to a host of new applications.
“Anywhere there’s a surface and water in the liquid state,” Tom Wood confirms, “you’re going to have biofilms.”
In riverbeds and showerheads. On the hulls of ships and inside pipelines. On contact lenses and joint prostheses and the gleaming white surfaces of your teeth. Biofilms, says Wood, professor of chemical engineering and biochemistry at Penn State, “are communities of bacteria that have the ability to cement themselves to a solid surface, and then—if you picture them in a river, say—rather than going with the flow they anchor down to a rock, and as the river goes by they get the nutrients they need and they’re able to thrive.”
“Communities” is the operative word. The biofilm that coats your teeth harbors more than 300 species of bacteria, working in concert. Most of these microbes either do no harm or are actually beneficial, but the few bad actors can saddle you with tooth decay and gum disease.
Biofilms cause corrosion, a huge economic drain on industry and infrastructure, and are also increasingly recognized as a leading culprit in chronic disease, from childhood middle-ear infections to cystic fibrosis. Hospital infections are largely due to their ubiquitous presence.
“In joint replacement surgery,” Wood says, “if an infection takes hold, there’s no drug they can add to get rid of it. They have to go back in, take out the original prosthesis, and put another one in—and hope the same thing doesn’t happen all over again.” Over 65 percent of all microbial infections are attributable to biofilms, according to the National Institutes of Health.
These complex microbial communities, in short, cause a variety of problems, both inside the human body and out. But they also have the potential to do great good, from wastewater treatment to oil-spill clean-up to producing alternative fuels—if their biochemistry can be controlled. Wood believes that it can.
“The whole idea of my lab,” he says, “is that if we can understand the genetic basis of biofilm formation, then we can either get rid of a biofilm, or promote it to do whatever we want.”
Sleeper Cells
The Dutch scientist Anton van Leeuwenhoek first noticed biofilms back in 1683. When placing a scraping of plaque from his own teeth under one of his first-generation microscopes, he spotted a host of “very little living animalcules, very prettily a-moving.” For most of the next 300 years, however, biofilms were largely ignored, as microbiology focused on individual organisms in their free-floating, or planktonic, state.
“But bacteria do have this desire to hunker down and form an attachment to a solid surface,” Wood says. “That’s the way they are in nature, primarily—living in communities. Over the last couple of decades, scientists have started to look at that state, and there’s been an exponential increase in biofilm literature and studies. There’s now even a mouthwash that talks about including anti-biofilm compounds—so the public’s waking up to it, too.”
Living in communities, bacteria are much hardier than when floating around free. They’re far more resistant to antibiotics—up to a thousand times more resistant, according to common estimates. “They’re much harder to kill,” Wood acknowledges, “but they’re even trickier than that.” Standard antibiotic treatments, he notes, target bacteria that are growing, dividing, evolving. “But in a biofilm, up to 10 percent of the population is not actively metabolizing.”
Under antibiotic attack, Wood explains, these bacteria in effect “put themselves to sleep” to avoid destruction. “If a cell is asleep, not dividing, the antibiotic has no effect,” he says. Then, when the coast is clear and the drug has run its course, these sleeper cells have the ability to wake themselves up and kick off a whole new infection.
Appropriately, they’re called persisters. Their discovery is fairly recent, and when and how they work are hot topics among researchers of infectious disease. “What’s really fascinating to me,” Wood says, “is that they don’t undergo genetic change at all. There’s no mutations, no change in the DNA. It’s the opposite of building up genetic resistance.”

Periodontal Biofilm Frequencies
Frequency Foundation subscribers have access to an extensive set of biofilm frequencies directed at gum disease. The organisms can travel throughout the body and cause heart disease, joint problems, digestive issues, and many other problems.

Live Longer: Reduction of Calcification in the Arteries with Frequencies