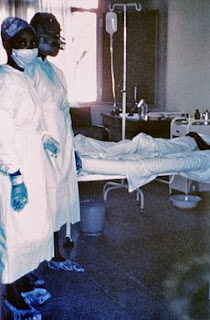 Ebola virus disease (EVD) or Ebola hemorrhagic fever (EHF) is the name for the human disease which may be caused by any of four of the five known ebola viruses. These four viruses are: Bundibugyo virus (BDBV), Ebola virus (EBOV), Sudan virus(SUDV), and Taï Forest virus (TAFV, formerly and more commonly Côte d’Ivoire Ebola virus (Ivory Coast Ebolavirus, CIEBOV)). EVD is a viral hemorrhagic fever (VHF), and is clinically nearly indistinguishable from Marburg virus disease (MVD).
The name comes from Ebola River in Republic of the Congo, where it was first found. (Wikipedia)

For details on the current epidemic see the New England Journal of Medicine.

The Columbia Flu Predictor is now tracking Ebola. Data below show incidence and mortality from Sierra Leone. The mortality rate has dropped below 50% but the curves are still trending up. 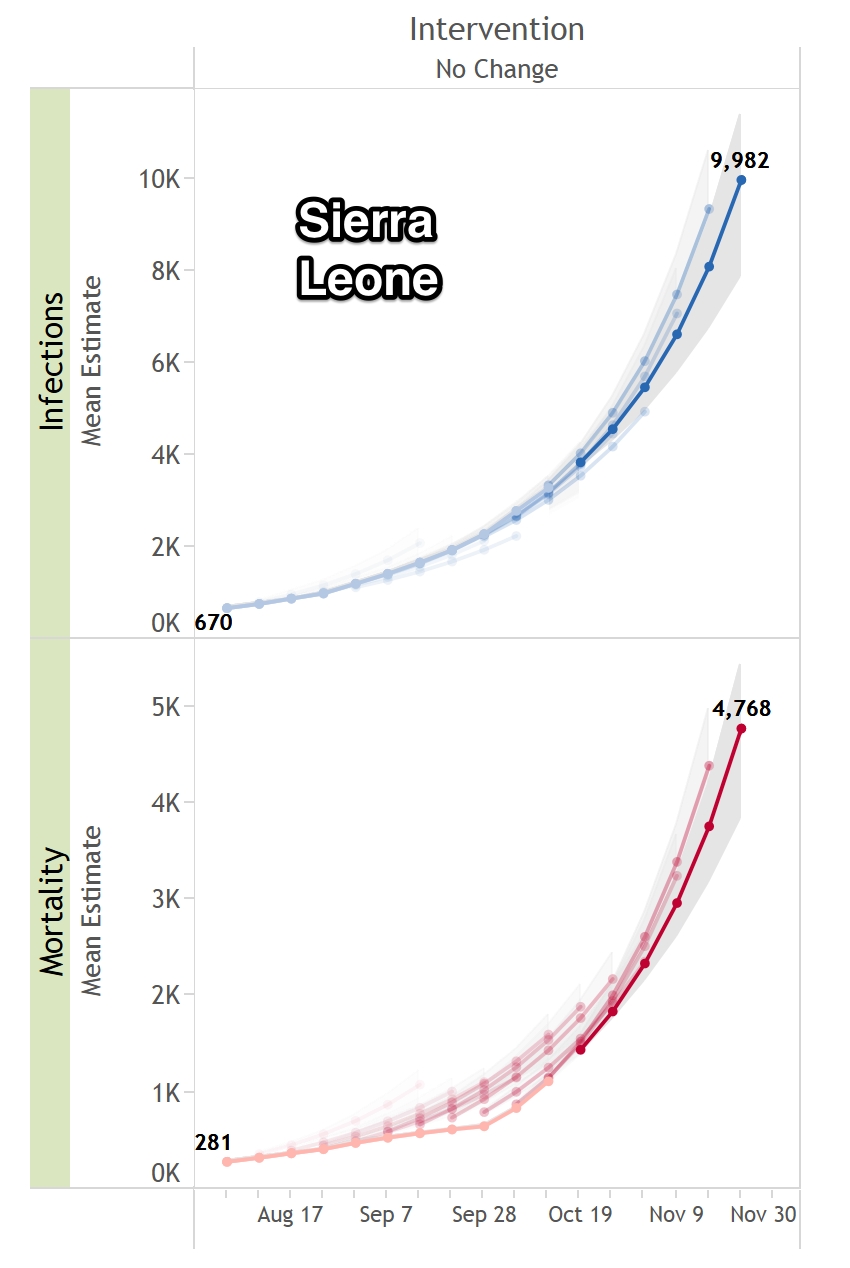 Dr. Keith Scott-Mumby writes, “Healthy well-fed victims of Ebola who died: zero. Undernourished, already-sick victims of Ebola who died: 2,461 to date. Serious fatality: the truth. Note that the rough figures released last week put total cases at around 6,500 and deaths at 2,200, that means it’s only about 30% fatal and NOT 90% as the US media keep screaming in their scare frenzy. Four healthy, well-fed Americans have contracted Ebola and survived comfortably. As I told you a couple of weeks ago, the supposed savage image of this infection had more to do with the terrain it’s in, meaning among peoples who are shocked, overloaded with toxins, under-nourished and weary from decades of internecine wars. But the manufacture of hysteria continues.”

The new Frequency Research Foundation update available to frequency subscribers includes new ebola virus strains, including a virulent strain seen in Africa, as well as updates to previously published frequencies. Several U.S. infections have been eliminated with these frequencies and a clear pattern has emerged in Hadoscan runs for those with more serious infections.

This frequency set is now being transmitted by parasites like the flu. Mild cases will be asymptomatic or cause general malaise for about a week. More serious cases will put you in bed.

A while back a subscriber asked me to pull together ebola virus frequencies, all of which were embedded in the lyme frequencies. The good news for lyme sufferers is that you have some immunity to almost all the nasty viruses in the world including several strains of ebola virus. The bad news is that if you don’t eliminate them with frequencies they will be circulating in your system for a lifetime.

The ebola viruses sometimes travel with the swine flu which is also a lyme based disease. At least one ebola strain can cause your skin to slough off it you get a bad infection, so it is good to have these frequencies in your emergency toolkit.

Even in the worst case it takes a while to die of the ebola virus and that is long enough to eliminate it with frequencies. What can make it challenging is if the route of infection is a parasite (as is commonly the case). Then you must kill the parasites or they keep reinfecting you (the reason flu is so hard to eliminate). There are two parasite sequences in the current ebola set known to be associated with the ebola virus. There may be more.

Also, viruses come in groups of at least two or three, as a single virus cannot usually overwhelm the immune system. A recent case of ebola infection was associated with rhabdovirus carpia, another virus seen commonly in lyme disease and swine flu infections.

To obtain frequencies become a subscriber using the link on the right side of the page.