A Statement For GeoengineeringWatch.org From Scientist Michael Davis

My name is Michael Davis, I was employed as an Environmental Engineer for nearly 16 years in the National Pollution Discharge Elimination Systems (NPDES) Programs Branch of the Water Division in Region 5, Chicago of the USEPA. I was terminated as a public servant performing a public service for raising the issues of anthropogenic deposition of aluminum due to atmospheric geoengineering. 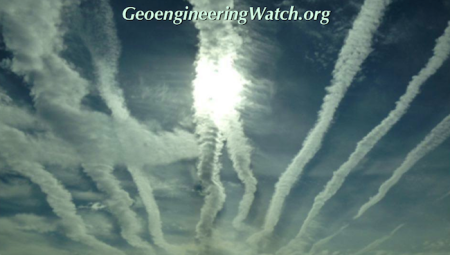 In addition, I brought up the industrial hazardous waste byproduct of fluoride known as HFSA (being sold primarily by the phosphate fertilizer and aluminum industries) to drinking water utilities for disposal into the nation’s drinking water systems. This does not include pollutants that are discharged from wastewater reclamation facilities into receiving waters.

The issue regarding anthropogenic deposition of aluminum due to atmospheric geoengineering came up in May 2013 when a colleague in the NPDES Programs Branch sent a general email to everyone regarding “NPDES and Climate Change”. I sent a six (6) bullet point one – sentence response to my colleague. Nearly six (6) weeks later my supervisor (at the time) set up a conference call to inform me that I would be receiving a Letter of Reprimand for making false, malicious and unfounded statements against colleagues, supervisors, management and elected public servants. Furthermore, my then supervisor claimed that my statements damaged the integrity and reputation of the agency.

In April, 2014, my last supervisor assigned me to the Beloit, Wisconsin wastewater reclamation facility DRAFT permit review. I asked the permit writer why fluoride (a poison) was be disposed of in Beloit’s drinking water supply?  She could not provide an explanation.  Approximately two (2) weeks later my supervisor placed a “gag order” on me barring me from having any communication written or verbal with anyone unless he approved ahead of time and was present on all conference calls. It was claimed by my supervisor (and management) that the “gag order” would remain in place to prevent me from making statements that would further damage the  integrity and reputation of the agency.

Furthermore, my supervisor kept giving me assignments like Beloit, Wisconsin where fluoride, along with other pollutants knowing that I would describe the adverse human, animal health effects along with adverse environmental effects of them in my DRAFT Permit review reports. The adverse human, animal and environmental effects were completely ignored by my supervisor.

I eventually crafted a general description of the adverse human and animal health effects in an email to my supervisor and upper level management.  Initially was ignored by all of them. I had to send the original descriptive email several times over about a six (6) month period of time before I received a reply from the water division director who just parroted the corporate agenda pertaining to fluoride disposal into the nation’s drinking water systems.

The label in the photo above should be shocking to any that are even slightly awake. Highly toxic industrial waste that is officially labelled as a “drinking water additive”.

In doing my own research into the issue of anthropogenic deposition of aluminum from atmospheric geoengineering (as well as fluoride and other pollutants) in an attempt to determine why there was strong opposition from my supervisor and the EPA in general it this (factual reports on the issues). It is because the EPA wants to continue their cover-up, collusion, and criminality pertaining to pollution and contamination being perpetrated by their puppet masters, the multinational corporations.

The EPA (like the FDA, CDC, etc) is a complete sham. Because the “P” in EPA stands for protection of corporate profits and not for protecting human, animal and environmental (or biosphere) health. The EPA like other governmental regulatory agencies are corrupt to the core, completely dysfunctional and have been completely hijacked by the multinational corporations.  I will not allow any of my ex – supervisors, ex – branch chiefs, ex – divisions directors, ex – EPA acting regional administrator or ex – EPA administrator or other individuals either identified or unidentified to get away contaminating our one and only biosphere (soil, water and air), and causing untold adverse human and animal health effects.