Frequency Foundation
Resonance is the Key
Close
HomeBlogUncategorizedHundreds of Millions Exposed to Carcinogenic...
Previous item Why this Doctor Doesn't... Next item BEC 5 Curaderm - A...

Frequency Research Foundation continues to find SV40 vaccine in malignant cells. Strains of the virus have proliferated and promote cancer wherever found. Many new strains discovered in 1917 will be published here. This is the most studied virus in human history. See Bookchin and Schumacher’s exellent book “The Virus and the Vaccine.” 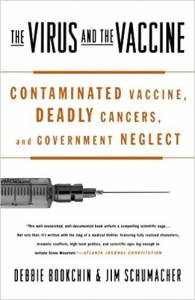 Many millions more people than previously thought might have been given polio vaccine contaminated with a monkey virus linked to cancer.

It has been known since 1960 that early doses of polio vaccine were widely contaminated with simian virus 40, or SV40, which infects macaque monkeys. Tens of millions of people in the US and an unknown number in other countries, including the UK, Australia and the former Soviet Union, may have been exposed prior to 1963.

The contamination occurred because the kidney cells the vaccine virus was grown in came from monkeys infected with SV40. Health officials say the problem was eliminated after 1963.

Now Michele Carbone of Loyola University Medical Center in Chicago has announced results that suggest the Soviet polio vaccine was contaminated after 1963, possibly until the early 1980s. “Is there infectious virus? The short answer is, yes,” Carbone told the Vaccine Cell Substrate Conference 2004 in Rockville, Maryland, last week.

The vaccine was almost certainly used throughout the Soviet bloc and probably exported to China, Japan and several countries in Africa. That means hundreds of millions could have been exposed to SV40 after 1963.

The SV40 Cancer Foundation provides an awesome summary of the history of SV40 and the polio vaccine. Here is a short excerpt:

By 1999, numerous pathologists, microbiologists, and virologists throughout the world had detected SV40 in a variety of human cancers such as brain tumors[66] including medulloblastomas,[67] bone cancers,[68] and mesotheliomas[69] a fatal lung cancer. These were the very same cancers that were created when SV40 was introduced into animals.[70] The advent of Polymerase Chain Reaction (PCR) technology that could identify the genetic code of specific strands of DNA demonstrated with precision that it was this monkey virus that was being detected in human cancers and no other.[71] Moreover, the rates of these particular cancers had steadily increased over the last few decades.[72] The question that had been left unanswered for almost four decades now faced scientists again—was SV40 responsible for causing or contributing to human cancers?

Over the last forty years since its discovery, SV40 had become one of the most widely studied and best understood viruses in microbiology.[73] It was routinely used to create human cancers in the laboratory in order to test cancer therapies.[74] In addition, it is now known how this virus caused cancer on a molecular level. After careful study documented in peer reviewed publications, leaders in SV40 research announced that SV40 was a class 2A human carcinogen.[75]

Nonetheless, the various United States government agencies such as the Centers for Disease Control (CDC) and National Cancer Institute (NCI) disputed these conclusions. According to the CDC, “SV40 virus has been found in certain types of cancer in humans, but it has not been determined that SV40 causes these cancers.”[76] According to the National Intsitutes of Health (NIH), “the NCI is continuing to evaluate the possible link between SV40 infection and human cancers.”[77] A question has been raised whether this continuing evaluation is being performed with complete scientific integrity. One article written by an attorney and published in a peer reviewed scientific journal describes how the NCI deliberately compromised a study that would have demonstrated the association between SV40 and mesothelioma.[78]

While the United States government continues to evaluate whether or not SV40 represents a public health threat and whether SV40 is a human carcinogen, several scientists at the NCI concluded that SV40 contributed to the formation of mesotheliomas.[79] In fact, the federal government has licensed technology to target SV40 in the treatment of human mesotheliomas.[80]

SV40 and the Public Health

Despite the government’s foot dragging, in the last several years, scientists from around the world have made startling and disturbing discoveries. They have found SV40 antibodies in a significant percentage of people including children who were too young to receive the SV40 contaminated vaccines of the early 1960’s.[81] They have also discovered that cancers with SV40 are less likely to be responsive to chemotherapy and radiation because SV40 interferes with the genes necessary for cancer cells to die when they are exposed to chemo or radiation therapy.[82]

The Institute of Medicine Report

In July 2002, the National Academy of Science Institute of Medicine (IOM) Immunization Safety Committee convened a study into SV40 and cancer which culminated in a report published in October 2002. According to the IOM report “SV40 Contamination of Polio Vaccine and Cancer”:

Follow the Science – COVID-19 Vaccine Mandates and the U.S. Military