For decades, this blog has reported on the health effects of toxic metal spraying in the atmosphere. The entire ecosystem is now polluted with high levels of aluminum particles, other toxic metals, glyphosate, parasites, bacteria, and viruses. These cause multiple types of health effects and the aluminum may be part of the reason for the epidemic of Alzheimer’s disease.

The Airdog X5 air purifier is very effective at detecting exposure. The particle count indicated on the front of the machine should be below 10. When it suddenly goes above 100 there are chemtrails in your house (unless you have driven the particle count up by cooking or spraying contaminants yourself). Once you have hard data on how often you are affected in your home by chemtrails you may want to put a ChemBuster in your yard. It helps disperse the chemtrails and will help both you and your neighbors.

See photo below for Air Dog Red Alert. In 2018, more massive spraying with smaller particles (harder to see in atmosphere) allowed them to descend to the ground in bad weather and infiltrate homes. These particles are now much harder to disperse with a ChemBuster. They also cause nastier health effects. Chemtrail frequencies should be run when the Air Dog provides a contamination alert if no other obvious source of air pollution is present (cooking, fires, toxic cleaning supplies, etc.). 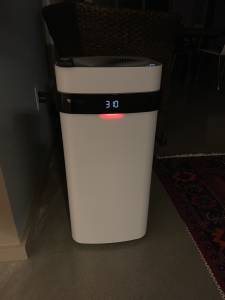 German research now shows that chronic aluminum toxicity in the body products massive amounts of parasite infections, something the Frequency Research Foundation has seen on a daily basis since 2001 when parasite frequencies began to be identified.

Nano-Aluminum, Glyphosate, and the Life Saving Work of Parasites

The bodies of Americans are saturated with very high levels of nano-aluminum. This provides ideal conditions for severe parasite infestation. These burdens are making us a country of chronically ill and cognitively impaired people.

Research is now beginning to clearly demonstrate the health effects of chronic spraying of the atmosphere with aluminum, barium, and other toxic substances.

According to Dr. Dietrich Klinghardt, MD, PhD, the ingredients of the persistent contrail formula that is being sprayed in the upper atmosphere by jet aircraft contains nanoparticles of aluminum (in several forms) along with barium, strontium, mercury, plastics and various other ingredients. Even viable Lyme disease cysts and other biological substances have been found in the nanoparticle dust that is falling from the sky.

Dr. Klinghardt has contributed significantly to the understanding of metal toxicity & its connection with chronic infections, chronic illness, & pain. He has been instrumental in advancing various fields within biological medicine, and regularly sees patients in the Sophia Health Institute located in Washington State and in his German clinic.

In Germany, his understanding of modern illness and his methods for assessing and treating modern chronic illnesses are being used by two thousand doctors.

Dr. Klinghardt identifies two powerful factors that are destroying the health of Americans. They are environmental toxicity from the interaction of various toxic metals and glyphosate, and environmental exposure to electromagnetic frequency radiation from technology that uses microwaves.

Both factors are creating ideal conditions for parasite infestations. Microwave radiation from smart meters, cell phones, Wi-Fi routers, and cell towers were discussed in a recent series of articles from Health Impact News.

It is important that you understand that when we inhale aluminum we have absolutely no biological barrier against it going into the brain.

If we eat aluminum from the frying pan, there is very little [exposure]. It does very little damage without glyphosate.

We could eat aluminum all day long and it would not make us toxic. … [However], the moment we inhale the smallest amount of aluminum [when there is glyphosate in our bodies] we get highly toxic. See Nexus News …

Aluminum is related to the global epidemic of autism. Some of it comes from vaccines but most of it probably comes from aerial spraying.

Aluminium in brain tissue in autism

Autism spectrum disorder is a neurodevelopmental disorder of unknown aetiology. It is suggested to involve both genetic susceptibility and environmental factors including in the latter environmental toxins. Human exposure to the environmental toxin aluminium has been linked, if tentatively, to autism spectrum disorder. Herein we have used transversely heated graphite furnace atomic absorption spectrometry to measure, for the first time, the aluminium content of brain tissue from donors with a diagnosis of autism. We have also used an aluminium-selective fluor to identify aluminium in brain tissue using fluorescence microscopy. The aluminium content of brain tissue in autism was consistently high. The mean (standard deviation) aluminium content across all 5 individuals for each lobe were 3.82(5.42), 2.30(2.00), 2.79(4.05) and 3.82(5.17) μg/g dry wt. for the occipital, frontal, temporal and parietal lobes respectively. These are some of the highest values for aluminium in human brain tissue yet recorded and one has to question why, for example, the aluminium content of the occipital lobe of a 15 year old boy would be 8.74 (11.59) μg/g dry wt.? Aluminium-selective fluorescence microscopy was used to identify aluminium in brain tissue in 10 donors. While aluminium was imaged associated with neurones it appeared to be present intracellularly in microglia-like cells and other inflammatory non-neuronal cells in the meninges, vasculature, grey and white matter. The pre-eminence of intracellular aluminium associated with non-neuronal cells was a standout observation in autism brain tissue and may offer clues as to both the origin of the brain aluminium as well as a putative role in autism spectrum disorder.